For the second time in the history of this young race, the winners are not Italian. And, as in 2013, the winner is the 37-year-old Bon Mardion from Areches-Beaufort in France, this time in pairs with Jacob Herrmann, 33-year-old Austrian from Werfenweng. Among the women, as predicted, the strongest team is composed by the young Giulia Murada and Giulia Compagnoni of the Italian Centro Sportivo Esercito.
It has been an incredible edition of Adamello Ski Raid, in a difficult year and with some last second defections. The track was not the usual one, but nevertheless very interesting with its 34 km and 3180 metres vertical drop for the Men and 30 km and 2560 metres vertical drop for the Women. 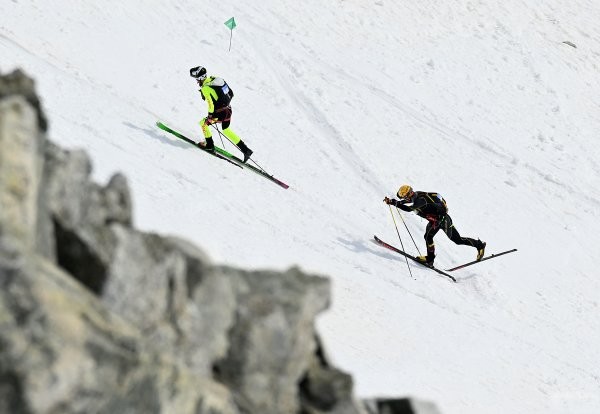 William Bon Mardion and Jakob Herrmann have been stronger right from the start, while heading to Passo Tonale. They stayed in command in all 4 ascents and descents, the first ones to pass at Passo Paradiso (2610 m), at Passo Presena (3000 m), at Passo Tre Denti (2990 m), even in the fast descent of Pisganino with its 2000 m vertical drop until the finishing line. The French-Austrian team arrived in Ponte di Legno in 3h41'57".
After the first team there were Hoffmann and Verbnjak, at least in the first 12 km of the race. Then in the ascent to Passo Presena they were passed by the team Werner-Anthamatten who kept the second position until Ponte di Legno.
Always in 4th position the first Italian team, composed by Federico Nicolini and Andrea Prandi, who started suffering from cramps at Passo Tre Denti and struggled to manage the energies until the finishing line, defending themselves from Pietro Lanfranchi and Filippo Beccari who succeeded in the last descent in overtaking the Swiss Pierre Mettan and Julien Ancay.
These positions remained the same until the end, the winners are Jakob Herrmann and William Bon Mardion who is confirmed one of the best ski alper ever, on the same podium where he stood with Mathèo Jacquemod in 2013. They have arrived 10'5" before the Swiss Werner Marti and Martin Anthamatten and 12'15" before the Austrian Christian Hoffmann and Paul Verbnjak. Fourth place after 22'29" for Federico Nicolini and Andrea Prandi, fifth place after 22'35" for Pietro Lanfranchi and Filippo Beccari. 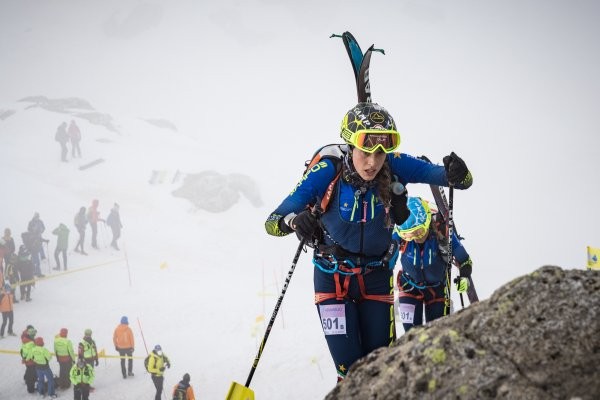 In the Women field, the favorites Giulia Murada and Giulia Compagnoni have been the strongest during the whole race, with a very good feeling in spite of their youth and racing for the first time together. They finished the race after 4h11'40", arriving 3'57" before the team composed by the French Lorna Bonnel and the Slovak Marianna Jagercikova. Third place, 11'08" after the winners, for the local team composed by Corinna Ghirardi and Bianca Balzarini, running for the Adamello Ski Team (organizer of the race).
The organizing committee chaired by Alessandro Mottinelli of the Adamello Ski Team is very satisfied with this edition of Adamello Ski Raid, they strongly wanted it despite the difficulties related to the health emergency. Satisfaction was expressed by the 160 teams representing 12 Nations, now the next edition will be in 2023 (Adamello Ski Raid takes place every 2 years) and it will be part of the prestigious circuit La Grande Course.