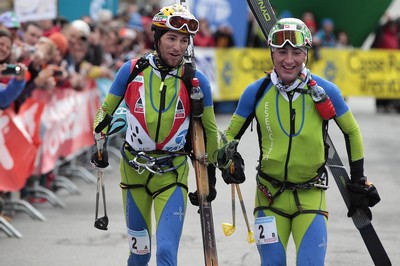 The 2015 Adamello Ski Raid is threefold; it counts as a World Cup leg, as circuit leg of the big classics “La Grande Course” and as the 23rd and last leg of the Dolomites Cup. A spectacular race, difficult to resist to with the best world skialp athletes. 350 couples in total, representing 13 nations. The female teams are instead 28. Starting from the champion Kilian Jornet Burgada, performer of many extreme challenges in the last years, he has chosen Lorenzo Holzknecht from Valtellina as companion. Then the strong Frenches William Bon Mardion and Xavier Gachet, as of Didier Blanc and Alexis Sevennec. The Austrians Alex Fasser and Johannes Walder. The ambitious alpines of the army sports centers Matteo Eydallin and Damiano Lenzi, the team companions Michele Boscacci and Robert Antonioli (all protagonists at the recent Verbier World Championships) and the experts Manfred Reichegger and Pietro Lanfranchi. There are many interesting challenges as the one of the son and dad Franco and Federico Nicolini, or the Franco-Spanish couple composed by Laetitia Roux and Varela Mireia Mirò who return to race together in the competition that they have dominated in the last two editions. Big expectations also for the two Italians Elena Nicolini and Katia Tomatis, as also for Laura Besseghinie and Raffaella Rossi. Keep an eye on the duo composed by the Swedish Emelie Forsberg and the French Mollaret.
Among the starters there is also the cross-country Olympic medalist Cristian Zorzi, with the companion Daniele Cappelletti. He will take part as RAI envoy, the public Italian TV for one-hour summary that will be transmitted the day after the race on the sport channel.