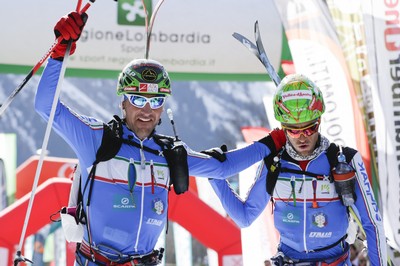 There is a big smile on the winners’ faces at the finish line in Ponte di Legno, at the end of 43 km with over 4000 meters vertical drop of the Adamello Ski Raid. Here are the interviews collected after the race:
Matteo Eydallin: “A great race. Until Cannone di Cresta Croce we were seconds, then Boscacci and Antonioli have paid the initial efforts slowing the pace. We, however, were able to set the race with our pace, managing our energies”.

Damiano Lenzi: “This is the success that we were missing and now we can say we won everything. World Cup, World Championships and the great classics. Today I had good legs and I felt I was ready to do a big race, but then I had intestinal problems from the cold, and I was forced to make a pit stop. Luckily I had friends with wipes along the way...”.

Michele Boscacci: "It was a difficult race, also because Reichegger and Lanfranchi immediately forced the pace and we didn’t know how to react to the attack. On the downhill after Passo Presena we managed to take the lead moving few meters forward. Then, on the third uphill Eydallin and Lenzi joined us and forced the pace. At the beginning we were able to stay in front of them, but then we started to decrease the intensity, while they accelerated and they are always pretty strong in downhill”.

Robert Antonioli: "On the first uphill we haven’t exaggerated, and as soon as we took the flat after Passo Paradiso we were able to reduce the gap with Reichegger and Lanfranchi. On top of Passo Presena we were again united, but then, when we were at the Lobbie, I had cramps and I had to drop the pace. My partner got me hooked with the lanyard also to motivate me and to try at this point to keep the second position, and we succeeded".